Advice to Myself When Starting Out as a Software Developer 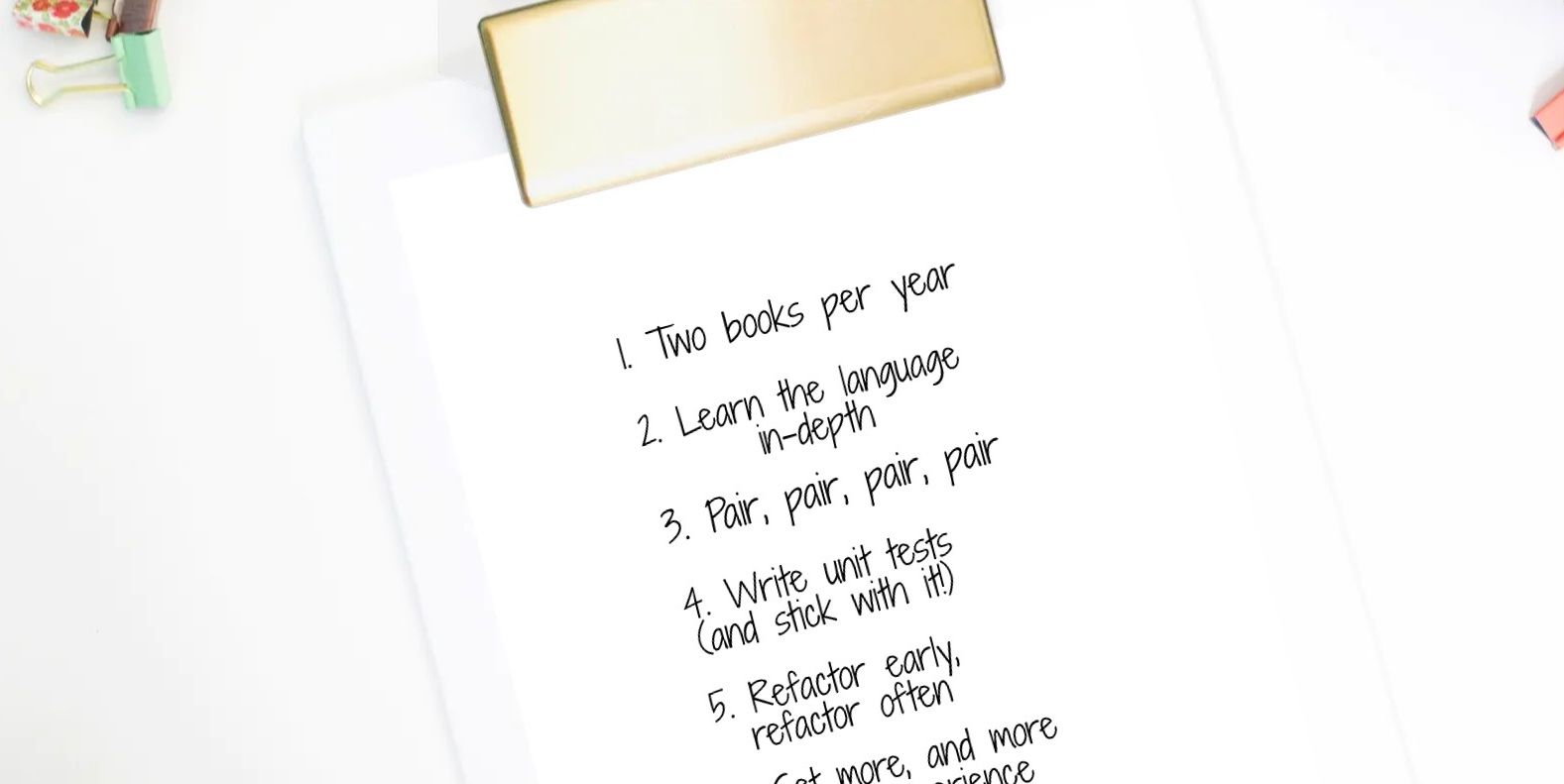 As I look back to over a decade ago, there are a few things I wish I'd started doing sooner. Habits that could have helped made me grow faster and in a more focused way. This is the advice I'd give my younger self, who has just landed their first professional software engineering job.

1. Take the time to read two books per year on software engineering

Every time I took the time to slowly and thoroughly read a recommended book on software engineering, I leveled up. By properly reading, I mean taking notes, talking chapters through with others, doodle diagrams, trying out, going back, and re-reading.

I wish I had read software-related books in my first few years as a developer. I only started doing this around year 5 of my engineering career. Books like C# In-Depth, Clean Code, and Javascript: The Good Parts all helped me elevate my craft at the time. It's not about me recommending these specific books - some of them are dated by now, anyway. What I do recommend is looking for books that go deeper than what you know now. This could be a book on a specific technology, or on software engineering practices.

When I read, I don't do it quickly. In fact, I do it rather slowly. I usually go a chapter or two in one sitting. I take notes or do highlights. When I'm done, I then recap and often discuss with others. I've also started writing book reviews on this site, mostly to reflect on what I've learned. I've picked up these habits the past few years. They helped me grow faster as an engineering manager: and this habit would have served me well as an engineer.

Don't be ambitious: one book every six months is already great. Pick a book, and spend the time to properly read it. And after you've read a book or two, I also recommend the book How to Read a Book: The Classic Guide to Intelligent Reading. I'm serious about this recommendation.

2. Learn the language you use at work in-depth, to the very bottom

I started coding using PHP and some level of JavaScript for part-time work. At university, I was taught C and C++, both of which I had little love for. For my first full-time job, I started doing C#. I knew a lot of languages at the surface level, but none of them really well.

Two years in, I started to be bothered that I had to rely on senior developers when debugging my C# code. One of the developers who became my goto debugging buddy always seemed to know the ins-and-outs of the depths of the language. He recommended the book C# In Depth for me to study. And study I did. I went all the way to threading, how garbage collection and generics work, behind the scenes. I pushed myself through countless hours to understand covariance, contravariance, and other, difficult to digest topics.

Learning the language I used at work in-depth was one of the best decisions I made. At my first workplace, this was accidental and had to do with the senior developer inspiring me. However, this knowledge became an advantage both at work, and when interviewing for other jobs. Later in my career, I intentionally dived deep into new languages and frameworks. At Skype, I was hired as a C# developer. However, we needed to switch over to using JavaScript and WinJS. So I dived deep into JS and mastered WinJS to the point of me teaching it through a Pluralsight course.

The more languages you know, the more you can evaluate their strengths and weaknesses. By the time I moved over to iOS, I knew a few languages pretty well. When Swift came along, I briefly followed and participated in language discussions, proposing readwrite reflection to be added to the language's roadmap. Knowing the characteristics of the language made it easier to decide what strategy my team should use to migrate from Objective-C to Swift. And the more languages you know, the easier it is to pick up new ones - and go deep easier, when you need to do so.

3. Pair with other developers more often

I feel like pairing is out of style these days. When I started, both Extreme Programming with continuous pairing, TDD, and mob programming were popular things to do. Some of my biggest professional leaps came after pairing with people. These leaps were more significant than reading any book.

A memorable pairing was with a developer who gave harsh code reviews to everyone - including me. One day I had enough, and I decided not to reply on the code review tool, but to sit next to them, asking them to walk me through their comments. I ended up learning a lot - while also telling them I didn't think their comments were fair. They took note and suggested I pair every time I feel this is the case. This is what I did. This developer had a thing for performant code, and through my pairing, I learned about the ins-and-outs of potential performance bottlenecks - and I'd like to think I taught them about maintainability concerns, in return.

Another great pairing memory was doing TDD with another engineer, where we passed the keyboard between writing the test and writing the production code for it. We did this for two days, implementing a tricky part of the system. It's hard to describe how eye-opening this exercise was. We completely changed our approach midway as we made count of all the edge cases. And we also formed a strong bond with this developer, which would last for months after.

4. Write unit tests and run them against a CI

Senior engineers often talk about the importance of unit testing. But the whole thing seems so counter-intuitive. Why would you spend more time writing trivial-looking tests? This was my approach for testing for some time.

For me, I had two of these moments. The first one was when I built the backend engine, as a side project, for a tiny online casino. The API was managing real money, and I was terrified of making mistakes. So I covered all my code with unit tests. The project was late - partially the tests to blame, as they took a lot of time. But it felt right to do it like this. I handed the project over to the customer at the end of the contract. Two years later, they told me how those tests had saved the team multiple times, who were about to push bugs in production - had it not been for tests breaking.

My other "aha" moment was building Skype on the Web. We built a greenfield, Google Hangouts competitor on web.skype.com. The team was a strong one, and we had full unit coverage and heavy integration testing. Three months into the project, an engineer decided we need to refactor the structure of the whole project. It was a very risky refactor, and all of us voted not to do it.

The developer challenged us that given the test coverage, it should be a piece of cake. If the tests pass, it works. I was skeptical. But that's exactly how it worked. After a week-long refactoring, he pushed a giant change... and nothing broke. Not then, not later. All tests passed. This was when I realized the safety net that a strong test suite gives and how it allows refactoring without fear.

For many years, I preferred to make the smallest possible change in the codebase, when I was working with a team. For my own, personal projects I did massive refactorings - but I was never comfortable doing this on codebases I did not fully own.

Then I met an engineer at Skype who would continuously do small or large refactors. They all made sense, and the code always got better. And they never messed things up. How did they do it?

As I paired with them, they knew their IDE very well and had refactor extensions added. Extracting a method, renaming a variable, moving into a constant... it took them a second of time.

I realized I was afraid of refactoring as I missed both the practice and the tools to do this well. As I started making refactoring a weekly habit, I got better at both. This habit served me well later on - I just wish it didn't take me so many years to start it.

6. Know that good software engineering is experience. Get lots of it.

When I started out, I used to be intimidated by senior engineers. They saw bugs in my code that I didn't. They knew answers I had no clue about. I assumed they're just smarter and better than me, and accepted this is how things are.

Look for opportunities to work on different stacks, different domains, and challenging projects. It took me seven or eight years to get what I would consider a "senior" level. I see some people joining high-growth places like Uber get there in three or four. The difference? Those people work on challenging projects, pushing just to keep up with the others around them, and often change teams midway, to start again. They volunteer to work on new projects and try out new technologies as the first in the team. I eventually became this person - but not for my first few years.

7. Teach what you learn

The best way to learn something is to teach it. I started doing this accidentally. In 2010, I started presenting on .NET and Windows Phone user groups. My presentations were not good, but I learned lots just by preparing for them.

These days, when I want to learn something well, I sign up to do a public talk about it. I offered to do a presentation on how Uber rolls out backend changes at scale in 2017, a year after joining Uber. When I did, I didn't fully understand how we did this - I was mostly doing mobile development until then, and managing a mobile team. By the talk, I had no choice but learn all the details. And I had plenty of pressure to do so: about a hundred local developers signed up for that event.

Many other people swear on this method working - with Shawn "Swyx" Wang being a prominent figure of the #LearnInPublic approach. His growth story is far more impressive than mine: going from changing careers to senior engineering roles at Netlify and AWS in four years, and writing a book about his learnings. The nice thing about teaching others is you can only win. Not only will you learn something by teaching, but you'll also help and inspire others.

And I don't know any experienced, role model developer who is not a decent teacher and mentor. The earlier you start giving back and teaching, the more natural this will come.